What Every Muslim Needs to Know About the Prophet Jesus (PBUH) 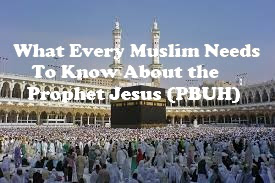 The Quran clearly points to Jesus Christ, as being a holy man, and a prophet, and so he cannot be a liar. The following essay presents to you, my dear Muslim friends, the words of Jesus himself. I ask you to carefully consider these things and search out whether they be true.


1. Jesus Christ claimed to be God.

In Mark Chapter 2, Jesus is preaching inside a man's house, and a sick man is brought to him. In verse 5, Jesus says


"Son, thy sins be forgiven thee."

Now consider, my friends, what an amazing claim that is to  make in front of other people.Everyone understands that the power to forgive sins belongs to God alone. I would not make the claim to be able to forgive sins, and I  suspect you would not either.  In fact, the assembled crowd responds, saying "Why doth this man thus speak blasphemies? who can forgive sins but God only?"
Jesus answers them and says:

In John chapter 10, Jesus is being pressed by the Jews to give a plain answer as to whether or not he was God manifest in the flesh. He answers them:


"I told you, and ye believed not: the works that I do in my Father's name, they bear witness of me. But ye believe not, because ye are not of my sheep, as I said unto you. My sheep hear my voice, and I know them, and they follow me: And I give unto them eternal life; and they shall never perish, neither shall any man pluck them out of my hand. My Father, which gave them me, is greater than all; and no man is able to pluck them out of my Father's hand. I and my Father are one."

The people listening responded by offering to stone him. Jesus asks them why they want to stone him, and they answer "For a good work we stone thee not; but for blasphemy; and because that thou, being a man, makest thyself God."
Now my dear Muslim friend, by Jesus's own words you can see that he claimed to be able to forgive sins, he claimed to be able to give men eternal life, and he claimed to be equal with God. All of these are attributes of God alone. Was this holy prophet telling the truth when he spoke of himself?

2. Jesus Christ Died on the Cross, and Rose again

Before he was captured and crucified, Jesus Christ predicted his own death, and his own resurrection. In John chapter 10, he says:

In Luke chapter 18, Jesus prophesies again regarding his own death, and says:


"Behold, we go up to Jerusalem, and all things that are written by the prophets concerning the Son of man shall be accomplished.For he shall be delivered unto the Gentiles, and shall be mocked, and spitefully entreated, and spitted on: And they shall scourge him, and put him to death: and the third day he shall rise again."

In Mark 9, Jesus is teaching his disciples and tells them:


"The Son of man is delivered into the hands of men, and they shall kill him; and after that he is killed, he shall rise the third day."


"Ye know that after two days is the feast of the passover, and the Son of man is betrayed to be crucified."

After his resurrection, Jesus appeared to his disciples and told them:


"Behold my hands and my feet, that it is I myself: handle me, and see; for a spirit hath not flesh and bones, as ye see me have."

In the first chapter of  book of Revelation, John encounters Jesus Christ again, and Jesus tells him:


"Fear not; I am the first and the last:I am he that liveth, and was dead; and, behold, I am alive for evermore, Amen; and have the keys of hell and of death."

Consider these things, friend. By his own words, Jesus knew he was going to die on the cross before it happened. He knew he was going to rise from the dead. He appeared to his disciples with the wounds of death in his body, and proclaimed to John that he had been dead, but now was alive. Was Jesus telling the truth?

3. Jesus Christ is the Only way to Heaven

In John chapter 11, Jesus is speaking to the sister of his friend Lazarus, and he tells her:


"I am the resurrection, and the life: he that believeth in me, though he were dead, yet shall he live:And whosoever liveth and believeth in me shall never die. Believest thou this?"

In John 14, Jesus tells his disciples:

Jesus Christ, from his own mouth claimed to be the source of eternal life and the only way for men to achieve a resurrection from the dead. He claimed to be the only way for a man to get to God. Jesus Christ claimed that your good works cannot save you, your devotion to God cannot save you; only he can save you from your sins. He accomplished this by paying the penalty for your sins with his own death upon the cross. He displayed victory over death by raising himself from the dead, and he promises the forgiveness of sin to all those who will put their faith and trust in him alone.
What if the prophet Jesus Christ was telling the truth?
I beseech you to consider these things in your heart. Are these things true? And if they are, why have you never been told?


Posted by Michael S. Alford at 7:23 AM No comments: Links to this post