Animal Control Comes A Callin': An Exercise in Soft Tyranny

The Scariest Song in the World

Among the  host of insipid holiday songs that are played on an endless loop in every public square until the listener slowly goes insane is a chipper little ditty called "Santa Claus is Coming to Town", whose lyrics go something like this:

He sees you when you're sleeping
He knows when you're awake
He knows if you've been bad or good
So be good for goodness sake!

O! You better watch out!
You better not cry
Better not pout
I'm telling you why
Santa Claus is coming to town
Santa Claus is coming to town
Laying aside the soul-strangling tune that is no doubt bouncing around in your skull ( I apologize), lets just take a look at the words themselves. When we do, it becomes readily apparently that something hinky is going on at the North Pole.
The very song itself begins with a warning as we are told "You'd better watch out, you'd better not cry". The listener is admonished to alter their behavior and alter it quickly. No matter what the  reason, no matter what the justification, a blanket clarion call against crying or pouting rings out!  The reason given is yet another grim warning ; "Santa Claus is coming to town".
But why should the appearance of this ripe jolly old elf be of such concern for us? Why does the songwriter feel the need to  call out to us to straighten up our act?  The clue is laid in the very next verse; "He's making a list, and checking it twice." Old Chris Kringle apparently is intensely interested in the behavior of the citizens of the world to the point that he documents their behavior and  back-checks it for errors.  The next line is equally chilling ;"Gonna find out Who's naughty and nice".  The  CEO of the North Pole doesn't appear to already know  who is 'naughty or nice', and therefore has to "find out". It's more than a little disturbing that, while the  song hints at the existence of some sort of vast intelligence-gathering apparatus deployed by Old Saint Nick, we aren't given any insight as to the parameters of what makes somebody naughty or what makes somebody nice.  Much like the NSA, Santa monitors and documents, but holds the means and methods close to his vest.
As if this affront to personal privacy wasn't enough, the next line peels the onion back another layer;  "He sees you when you're sleeping He knows when you're awake ".  Santa functions above even the  most grievous of police states. His jurisdiction is infinite, and his obsession with surveillance extends even to the sleeping hours of his hapless subjects. I mean, really, how naughty can you be while you're sound asleep , a brave soul might ask the unapproachable Claus.  It matters not.  There is no appeal from the naughty list, no oversight assigned to Father Christmas.
Going line by line, the true nature of the song is revealed; the songwriter pleads with the listener to beware of the all-seeing, all-knowing  fat man in red. The listener is admonished to correct their behavior and to go from pouting and crying to "be good for goodness sake", which is itself an exasperated cry of hopelessness and impotence in the face of the  eye-in-the-sky onslaught from the North. It's not enough to be good for the good of society, or for personal accountability before God, but rather as the only way to avoid the naughty list and the ill-described wrath that follows.  You can't stop him. You can't reign him in. The police cannot help you. Locked doors and barred windows will not prevent his progress into your homes, into the very rooms of your children. Your best bet is just to be as good as you can and hope for the best. Keep your head down and ride it out till New Years.Perhaps this is the reason children are told to be asleep before he arrives. Perhaps, much like the T-Rex in Jurassic Park, Santa's visual acuity is based on movement and a huddled child pretending to be asleep is sufficient for the  mysterious figure to come and go in peace.
Just in case the repeated warnings were not enough, the songwriter takes it up a notch and  shouts "O! You better watch out!" As a parting shot, the  listener is reminded to  dry up their tears and tuck their bottom lip away because the worst nightmare for an insomniac crybaby is  on his way; "Santa Claus is coming to town". 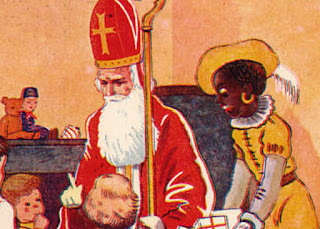 Posted by Michael S. Alford at 5:07 AM No comments: Links to this post

"Paul, a servant of Jesus Christ, called to be an apostle, separated unto the gospel of God,

The Tyranny of My Own Expectations


A few months back, before my attention was diverted towards more weighty matters, I wrote a post entitled The Tyranny of Other People’s Expectations.  In that post, I tried to explain how I had allowed other people’s ideas or my perceptions of other people’s ideas to color how I handled my children when they were all toddlers. I  talked about how my desire to ‘get it right’ led to actions that weren’t necessarily unscriptural, but were ‘extra-scriptural’.  Out of all the things I had written, this got the most attention locally.  We were contacted by several people of our acquaintance, who claimed to be speaking for other people of our acquaintance, and told that we were wrong, stupid, bitter, apostate, a stumbling block to the body of Christ and horrible parents.  These spokespersons claimed to represent a legion of parents in our sphere of influence that for years had lamented, amongst themselves, our lack of parenting skills. I was left with the distinct impression that people whom we believed to be our friends were in reality merely enduring us and our rambunctious children.  My wife cried for days. Some of these people blocked my wife on Facebook; the modern equivalent of a shunning I suppose, and to this day many of them still will not talk to us or acknowledge our presence when we run into them out in town.
I say this not to shame those people, although I do think the Judgment Seat of Christ will sort out a lot of those things.  I don’t say these things so that you, my beloved readers, will have one more spot of sadness in your heart. I say this so that my next comments have some context.
I have 4 children ranging in age from 13 to 7.  When we were younger parents, there was a fellow in Tennessee whose parenting advice was all the rage.  He has a ministry that puts a newsletter out full of advice, most of which is pretty solid.  But what bothered me back then (and bothers me now) is that the newsletters were all chock full of anecdotal stories about him, his children and his grandchildren.  The common thread that ran through all these stories was the remarkable success they were enjoying by deploying his recommended methods.  In these stories all of his children and grandchildren were happy, and instantly obedient, and potty-trained at 6 months old.  All of his progeny loved Jesus and were excited about church all the time.  The children in these stories would save up their chore money to go on mission trips and were always ready to give an answer to every man of the hope that lied within them. These stories were submitted as ‘proof’ that he knew what he was talking about, and the understood sentiment was that if we merely followed these methods, we would get the same results.
(By the way I don’t mean to single this fellow in Tennesee out. The  mom-blogosphere, for example is deluged with articles about ’10 Ways to Have  Happy Toddler’ and ‘9 ways to Make Your Children Enjoy Church’ and on and on and on.  But we mainly read behind this fellow from the Volunteer State.)
Now let me tell you this, and you can believe it or not; we did all that.  I can honestly say that, as much as was in me, we were consistent and firm. We didn’t allow whining or backtalk. We used discipline. We held family devotions, we were all involved in ministry. We prayed for our kids and we prayed with our kids. We have always been a very Bible-centered house, with scripture underpinning every aspect of our lives.  As our children were able to understand we reasoned with them and showed them how the things written in that book applied to everyday life.
Now let me tell you how that turned out.  My children turned out to be human beings after all. They are moral kids, and better behaved than most but at the end of the day dear friends, flesh is flesh. Saved flesh is still flesh.  Well-trained flesh is still flesh, and tired flesh wants to whine, even if you don’t allow it, and covetous flesh wants to throw a fit even if you forbid it.  . Flesh doesn’t want to read the Bible, flesh doesn’t want to submit to authority.
I think in our rush to produce ‘good kids’ we forget that the same struggles we have with our flesh our kids will have with theirs. Our job isn’t to crank out kids who always sit motionless in church, eyes fastened on the pastor. Our job is to train up human beings how to serve God in direct conflict with their own flesh.  Then, having equipped them for that battle, we have to be willing to let them fight that battle without assuming that the mere existence of a battle means we’ve failed.
My oldest son does not like to read his Bible. My middle son gets mad at inappropriate times. My daughter can be selfish and whines when she’s tired. My youngest son is overly compulsive. All my kids are lazy sometimes.  That doesn’t mean that we are bad parents; it means we gave birth to human beings.  We didn’t fail; we aren’t even done yet.
So as your brother in Christ let me encourage you to continue to fight the good fight, but not lose sight of what the fight actually is, and don’t let your own expectations ruin it all.
Posted by Michael S. Alford at 5:45 AM No comments: Links to this post